Malinois is a super active, alert, and smart dog breed that has that particular honest look of a hardworking dog. Mal is not bulky but elegant with a proud carriage of the head as the hallmark. The dog breed ranks 43rd in the list of 196 best dog breeds. Malinois dog is also known as Belgian Malinois as it was first bred in the northwestern region of Belgium. It is also called with the nickname, ‘Mal’.

Let us move on to details of this wonderful dog breed. 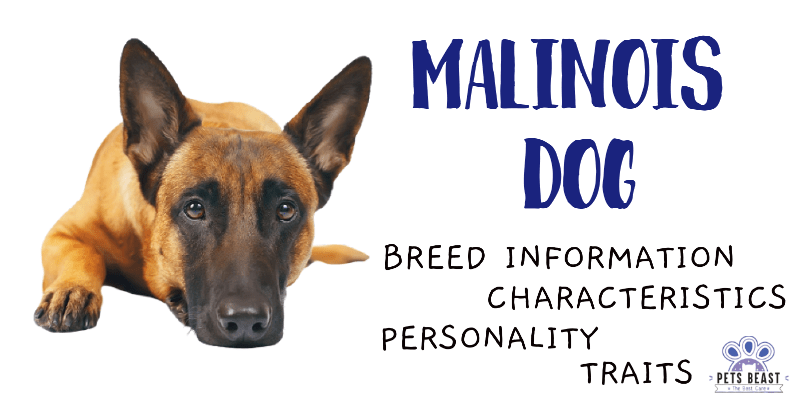 Malinois is a highly obedient and smart dog breed, with full potential of energy. Mal was initially bred for herding, but due to its smartness and intelligence, it also got introduced in the fields of police and military for rescuing, searching, and protection. They are also a good choice to be a family dog.

This dog has a smart active body with a coat of different colors like fawn and mahogany with black erect ears and brown questioning eyes. Mal goes well until it gets good exercise, playtime, and a walk. The problem begins when the Malinois gets ignored and neglected.

The origin of Malinois lies in Malines, the northwestern region of Belgium. First Malinois was registered by AKC in 1930.

Malinois was first developed somewhere in the 1880s. Mal is one of the 4 closely related dog breeds, Tervuren, Laekenois, Belgian Sheepdog, and German shepherd.

Malinois dog has been famous as a livestock herding dog for a long time. They were bred by serious dog breeders as working dogs and for herding the livestock.

It was brought to America first in 1911. The process continued till the World War 2. After World War 2, the import from Europe got banned. In 1960, the Malinois again got famous amongst the admirers and retained its value in America.

Since then, Malinois has been used worldwide for herding, as a police dog, and for the military as well. American Kennel Club registered the first Malinois dog in 1930.

Malinois dog is an extremely confident, brave, smart, and intelligent dog used for herding, protecting, rescuing, and tracking. Its special attributes make it ideal for police and military. It also has wonderful watchdog abilities.

Mal is highly affectionate and loving for the family and children it lives with but it is extremely reserved and unfriendly towards strangers. They are protective of their family and their property but not overprotective. They are neither shy nor aggressive.

They can become destructive and frustrated if they are neglected and not provided with enough exercise and stimulation.

Health Care of a Malinois Dog

Malinois Dog is an active and strong dog breed with an athletic body. It possesses high energy levels. Still, it can be affected by several diseases and can fall ill. The common diseases of Malinois dog are hip dysplasia, elbow dysplasia, progressive retinal atrophy, anesthesia sensitivity, cataracts, thyroid diseases, and epilepsy.

Proper health care and veteran visits can help you keep your dog healthy and protected.

Physical Needs of a Malinois Dog

A Malinois dog is one of the large breeds with extremely high energy levels and potential for playfulness. They love to play with a ball and fetch different objects.

They need jogging and long walks in addition to plenty of exercises. Mal needs wide open backyards for playing and exercising and cannot live in apartments and small houses.

They are affectionate and want to live close to their family. Living alone can make them sick and frustrated.

Adaptability of a Malinois Dog

Malinois have high potential of playfulness and great deals of stamina. This makes them suitable for wide and open areas, backyards, and big houses. They cannot adapt to apartments or small houses.

Malinois are not friendly towards strangers and become alert when a stranger approaches their owner or a family member. They are very sensitive dog and has a very low tolerance for being left alone. This can make Mal become ill and raise temperamental issues.

Mal has a short and straight coat that makes it love cool weather conditions. However, Mal can easily adapt to a warm-weather as well.

A dog breed like Malinois is quite large and strong with a little more intake of food. A mal requires high-quality & fully nutritional dog food of about 2 to 3 cups a day.

Mal is usually smart, slim, and active. So, if you want to maintain the physique of your dog, divide this meal into 2 and keep an eye on the weight of your dog.

Its ribs should feel under your hand but must not be visible. If you cannot feel the ribs after a gentle touch, your dog is overweight. Cut short its food and take it to exercise more frequently. Reduce the number of treats as well.

Breeding Cycle of a Malinois Dog

After ovulation, the pregnancy or gestation of a Malinois dog has a consistent period of 63 days or 9 weeks with + – 1 day.

A Malinois female does into heat twice a year as early as 6 months old and as late as 18 months old. The usual age of a Mal to go into heat is 10 to 14 months.

Lifespan and Growth Cycle of a Malinois Dog

A Malinois dog has a bit longer lifespan. It lives for up to 14 to 16 years.

A Malinois has a strong and muscular squarely build. It is a large dog breed with a male having 24 to 26 inches height and 60 to 80 pounds weight. A female is a bit shorter and lighter with 22 to 24 inches of height and 40 to 60 pounds weight.

A newborn puppy of Malinois will weight 1 pound. After 4 months it becomes 35 pounds and with turning 1 year old, the weight becomes 60 to 70 pounds.

Coat and Colors of a Malinois Dog

Malinois dog has a smooth and short double-coat that is very easy to groom and feels hard when touched. The hair is a bit longer around the neck. The topcoat is hard and the undercoat is dense and provides high resistance to survive in all weather conditions.

The coat of a Malinois is available in fawn to mahogany colors. The erect ears are black, with a black mask on face and black hair tips. The chest and toes of some dogs have white spots as well.

Friendliness of a Malinois Dog

A Malinois dog loves to socialize. If it is raised with children, it goes very well with them. As the Malinois dogs have a herding instinct, they can herd children as well. They need training for not doing so.

Malinois are extremely unfriendly for the strangers and can be aggressive for the new dogs and other pets. But when they start living with the other dogs and pets, they develop friendly behavior with them.